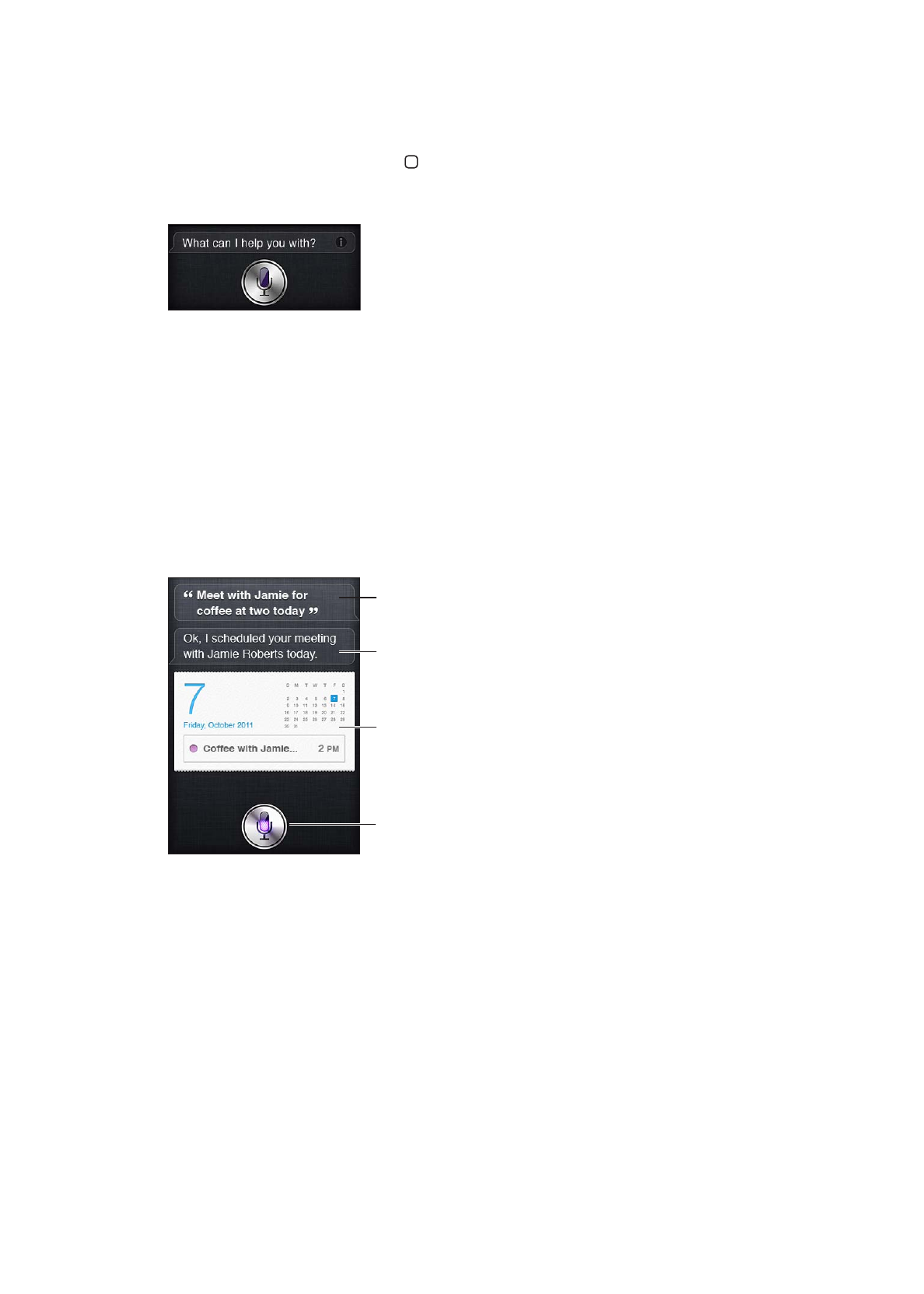 Siri comes to life with the press of a button.
Start Siri: Press the Home button until Siri appears.

You’ll hear two quick beeps and see “What can I help you with?” on the screen.

Siri waits for you to stop talking, but you can also tap the microphone icon to tell Siri you’re done.
This is useful when there’s a lot of background noise. It can also speed up your conversation with
Siri, since Siri won’t have to wait for your pause.

When you finish speaking, Siri displays what it heard and provides a response. Siri often includes
additional, related info that might be useful. If the info is related to an app—for example, a text
message you’ve composed, or a location you asked for—just tap the display to open the app for
details and further action.

What Siri heard you say

Tap to speak to Siri.

Siri may ask you if it needs more information to complete a request. For example, tell Siri to
“Remind me to call mom,” and Siri may ask “What time would you like me to remind you?” Don’t
worry about telling Siri everything at once. Siri prompts you for the details it needs.

You can start talking to Siri just by bringing iPhone to your ear, like making a phone call. If the
screen isn’t on—first press the On/Off or Home button. You’ll hear two quick beeps to indicate Siri
is listening. Then start talking. 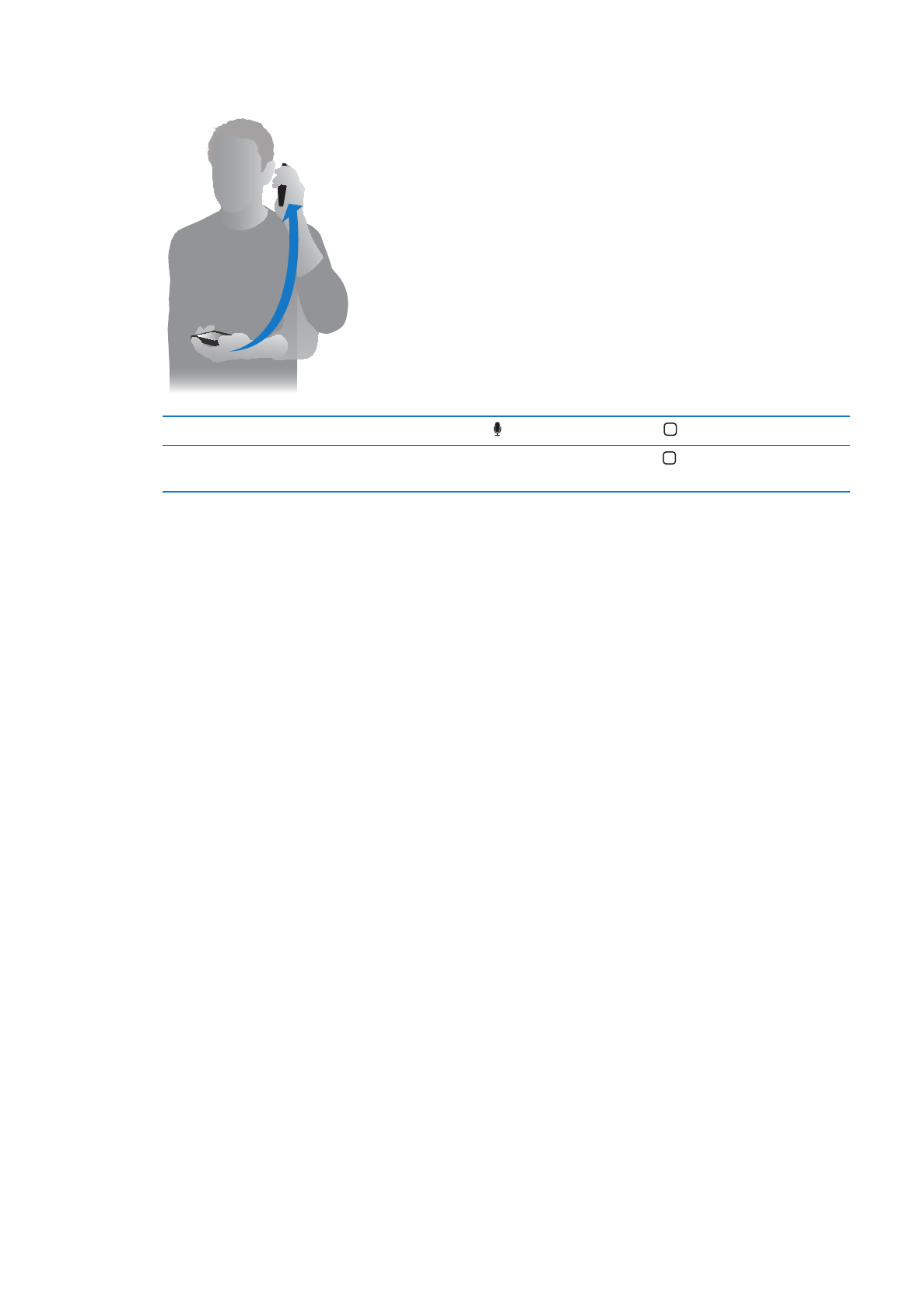 If Siri doesn’t respond when you bring iPhone to your ear, start with the screen facing you, so your
hand rotates on the way up.

Stop a phone call you started
with Siri

Telling Siri about yourself

The more Siri knows you, the more it can use your information to help you. Siri gets your
information from your personal info card (“My Info”) in Contacts.
Tell Siri who you are: Go to Settings > Siri > My Info, then tap your name.

Put your home and work addresses on your card, so you can say things like “How do I get home?”
and “Remind me to call Bob when I get to work.”

Siri also wants to know about the important people in your life, so specify those relationships on
your personal info card. Siri can set those up for you. For example, the first time you tell Siri to call
your sister, Siri asks you who your sister is (if you don’t already have that info on your card). Siri
adds that relationship to your personal info card so it doesn’t have to ask next time.

Create cards in Contacts for all your important relationships, and include information such as
phone numbers, email addresses, home and work addresses, and nicknames you like to use. 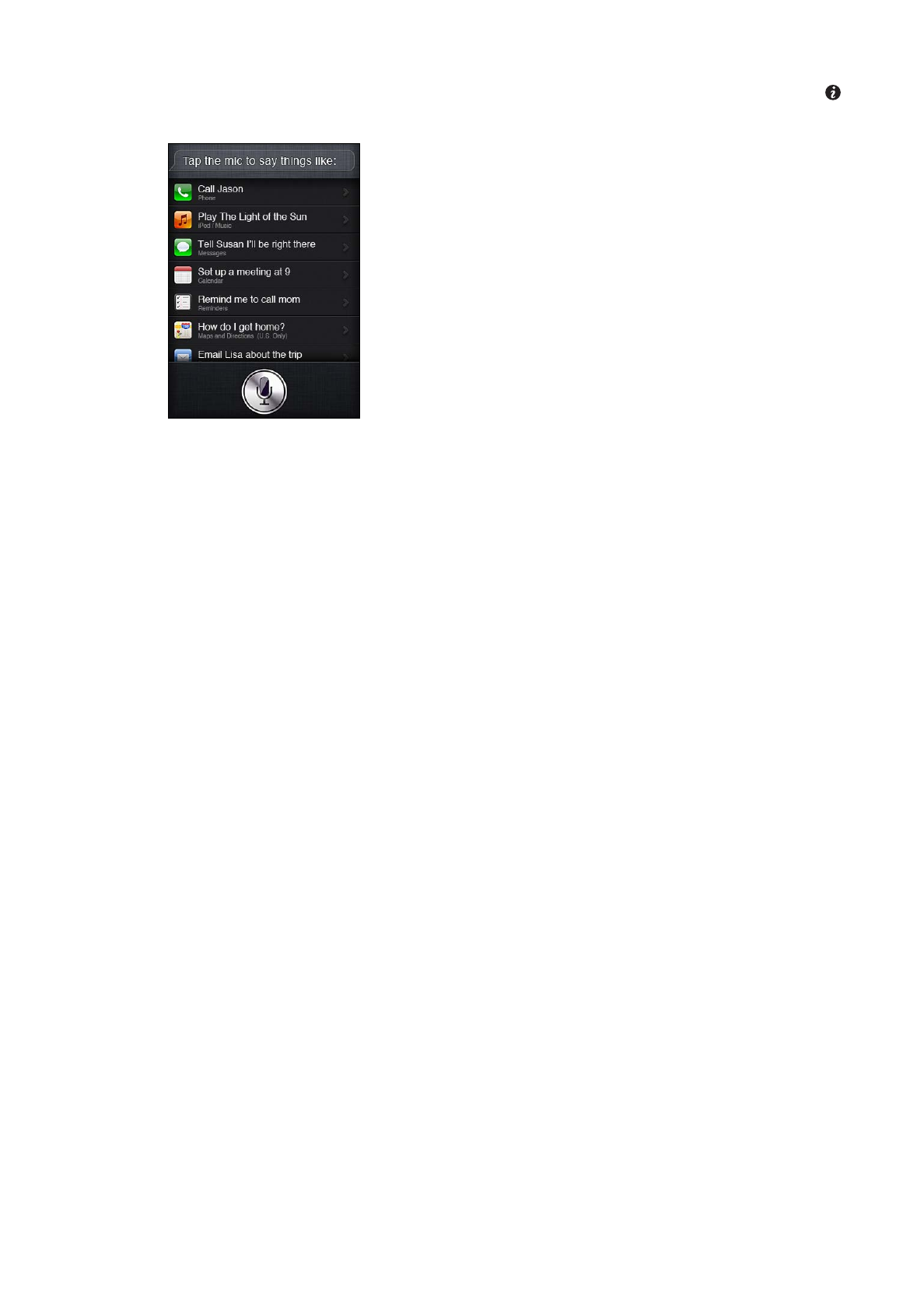 Siri gives you examples of things you can say, right on screen. Ask Siri “what can you do” or tap
when Siri first appears.

To continue a conversation with Siri, press and hold the button each time you want to talk.

When you use earphones or a headset, Siri speaks its responses to you. Siri reads back text messages
and email messages that you’ve dictated before sending them. This gives you a chance to change
the message if you want. Siri also reads back the subjects of reminders before creating them.

Turn Siri on or off: Go to Settings > General > Siri.
Note: Turning Siri off resets Siri, and Siri forgets what it’s learned about your voice.
Set options for Siri: Go to Settings > General > Siri.
Language: Select the language you want to use with Siri.
Voice Feedback: By default, Siri speaks its responses only when you hold iPhone to your ear or
use Siri with earphones or a headset. If you want Siri to always speak its responses, set this option
to Always.
My Info: Let Siri know which card in Contacts contains your personal info. See “Telling Siri about
yourself” on page 41.
Raise to Speak: Talk to Siri by bringing iPhone to your ear when the screen is on.
Allow or prevent access to Siri when iPhone is locked with a passcode: Go to Settings >
General > Passcode Lock.
You can also disable Siri by turning on restrictions. See “Restrictions” on page 166. 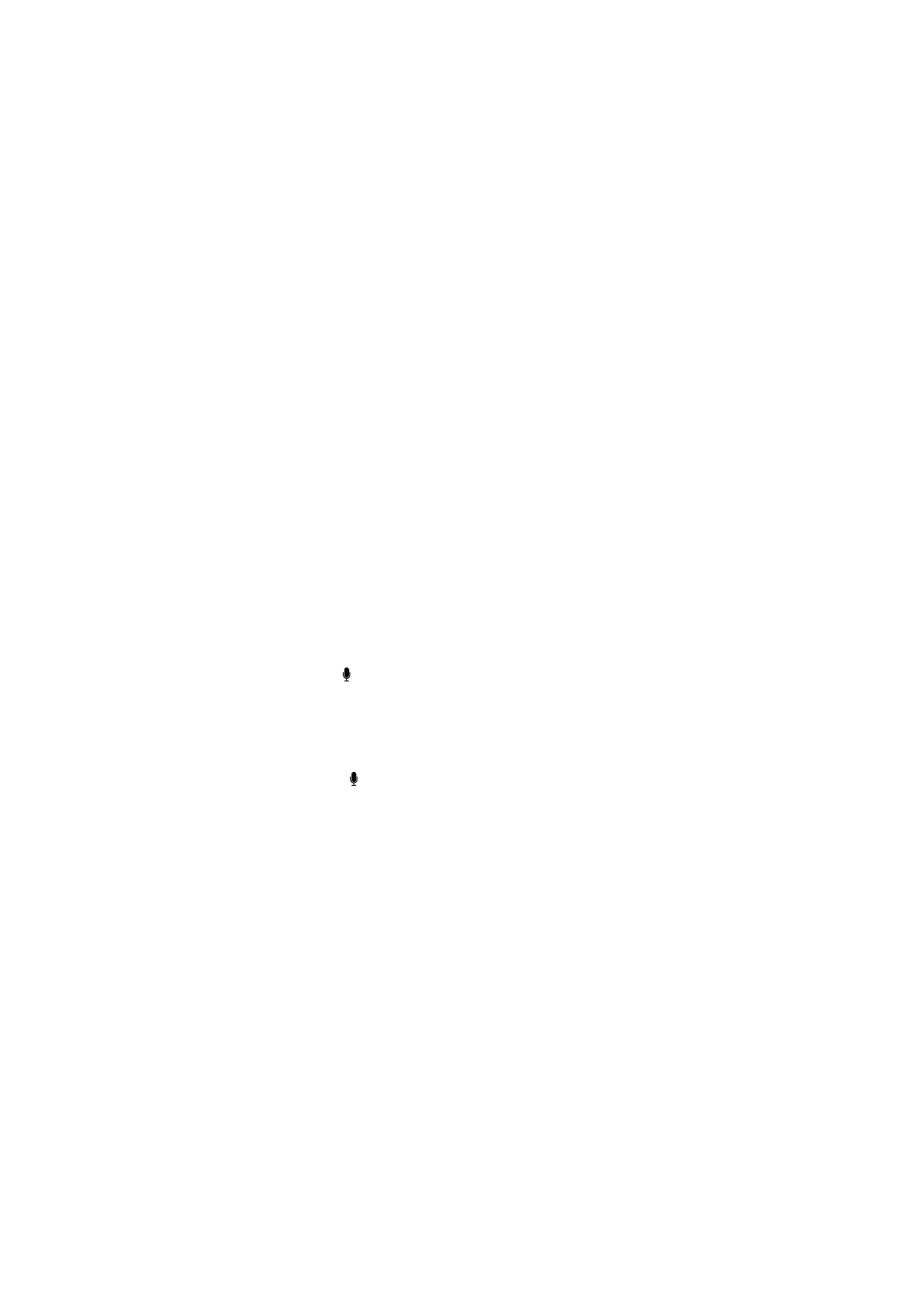 Because Siri knows locations like “current,” “home,” and “work,” it can remind you to do a certain
task when you leave a location or arrive at a location. Tell Siri “Remind me to call my wife when I
leave the office,” and Siri does just that.

Siri is accessible to blind and visually impaired users through VoiceOver, the screen reader built
into iOS. VoiceOver describes aloud what’s onscreen—including any text in Siri’s responses—so
you can use iPhone without seeing it.
Turn on VoiceOver: Go to Settings > Accessibility.

Turning on VoiceOver causes even your notifications to be read aloud for you. For more
information, see “VoiceOver” on page 143.